By Jim Morrill Charlotte Observer August 30, 2015 Democrat Jennifer Roberts and Republican Edwin Peacock III hold solid leads in their mayoral primaries a week before the start of early voting, according to a Charlotte Observer Poll. Roberts has the support of 39 percent of likely Democratic voters, one point shy of what she would […]

By Jim Morrill Charlotte Observer August 29, 2015 Crystal Richardson represents one of the most sought-after prizes of Charlotte’s Democratic mayoral primary: She’s a woman. She’s black. And she’s undecided. Those groups hold the key to the Sept. 15 primary, whose winner will be favored to become the next mayor of an increasingly Democratic city. […]

By Steve Harrison Charlotte Observer August 15, 2015 Last May, Jennifer Roberts began what might be one of the longest mayoral campaigns Charlotte has seen. Weeks after Patrick Cannon resigned after his arrest on federal corruption charges in late March, Roberts announced at Freedom Park that she would run. “A lot of people were encouraging […] 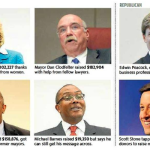 By Jim Morrill Charlotte Observer August 10, 2015  HIGHLIGHTS Democrat Jennifer Roberts led all candidates by raising more than $300,000 Democrat Dan Clodfelter tapped a network of fellow lawyers Republicans Edwin Peacock and Scott Stone turned to business and GOP donors From the corner office to across the street, Charlotte’s mayoral candidates turned to their […]

By Steve Harrison Charlotte Observer July 31, 2015 Jennifer Roberts has so far raised $302,277 for the upcoming Charlotte mayoral race, the most among Democrats and Republicans, according to the first campaign finance reports filed Friday. Roberts, who announced her candidacy in May 2014, said two-thirds of her donors have given less than $200. “My […]

By Jim Morrill Charlotte Observer July 22, 2015 Charlotte Democrat Jennifer Roberts Tuesday reported raising more than $300,000 for her mayoral bid, a near-record amount for this point in a campaign for an open seat. Roberts was the first mayoral candidate to file a fundraising report. They’re due at the end of the month. “We […]

Endorsement follows poll showing Roberts leads opponents by nearly 2 to 1 Charlotte, NC — Today, EMILY’s List, the nation’s largest group dedicated to getting more women elected to public office, endorsed Jennifer Roberts for mayor of Charlotte.      “I am proud that our campaign has earned the endorsement and support of EMILY’S List,” said […]