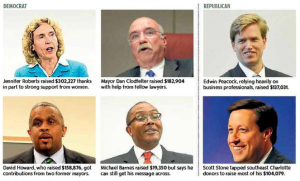 From the corner office to across the street, Charlotte’s mayoral candidates turned to their bases for the money they hope will lift them to victory.

Charlotte’s six major candidates tapped a range of supporters as they pulled in more than $900,000, according to reports filed this month.

• Democrat Jennifer Roberts relied on a wide network from earlier campaigns for county commissioner and Congress. With a long head-start on her rivals, she raised more than $300,000 from a variety of supporters, with an especially strong showing among women.

• Democratic City Council member David Howard raised $159,000 with contributions from across the city, including from two former mayors.

• Republican Edwin Peacock raised $137,000, while his GOP opponent Scott Stone took in $104,000. Both relied heavily on support from business professionals and raised most of their money in southeast Charlotte.

Turnout is expected to be low. Two years ago, less than 7 percent of Charlotte voters went to the polls to nominate a new mayor. In low-turnout elections, grassroots campaigning often makes more of an impact than money.

But fundraising is a broad reflection of a candidate’s support and organization.

“It’s a valuable indicator … but it’s not the only thing,” says Martha Kroph, a political scientist at UNC Charlotte.

“IT MEANS MY MESSAGE IS CONNECTING WITH CHARLOTTE VOTERS.”

Roberts began running more than a year ago. By January, she’d already raised $154,000. She tapped a network that helped her win four at-large terms on the board of county commissioners.

Her donors include academics, executives, teachers and business owners. A Spanish-speaking former diplomat, she raised money from La Noticia publisher Hilda Gurdian and other members of Charlotte’s international community.

“It means my message is connecting with Charlotte voters,” Roberts says. “It’s really a pretty diverse group, lots of moms but also executives and retirees. It represents the community.”

Clodfelter raised more than $61,000 from fellow attorneys. That was 42 percent of all he raised since he started running last spring. It included $18,500 from lawyers in his old firm, Moore & Van Allen, and $6,900 from those with his current firm, Parker Poe.

A former state senator, he transferred $37,700 from his Senate account. Clodfelter says his donations from other attorneys is a sort of testimonial.

“I thought it was a pretty positive sign that the people who know me best are willing to support me,” he says.

“I’M THE ONLY PERSON IN THE RACE WHO CAN TALK TO SOMEONE AT THE CORNER OF REMOUNT ROAD AND WEST BOULEVARD AND THE BOARD ROOM OF DUKE ENERGY.”

“I think I’m the only person in the race who can talk to someone at the corner of Remount Road and West Boulevard and the board room of Duke Energy,” Howard says.

“I’ve never been a big fan of fundraising,” he says. “But I did what I needed to do in terms of getting my message to voters and connecting with voters.”

Peacock, who raised nearly $400,000 in his 2013 race against Democrat Patrick Cannon, tapped familiar donors, most from business and many from the finance and insurance industries. This time he raised $137,000 in 42 days.

“We were ecstatic with that kind of response,” he says. “For being the last (major candidate) to announce, we were really pleased.’

Stone raised nearly as much this year as he did through his entire 2011 campaign against incumbent Democrat Anthony Foxx. Like Peacock, he found most of his support from traditional GOP donors in southeast Charlotte.

“I would say it reflects a broad base of support from a lot of different pockets in the community,” Stone says. 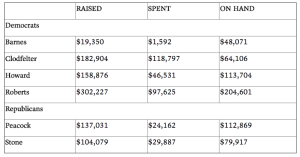 Source: Mecklenburg County Board of Elections